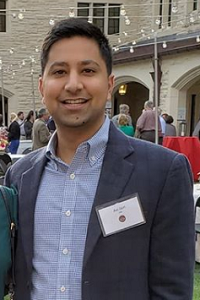 Avi Jain graduated from St. John’s School before completing his undergraduate degree in finance, strategic management, and cinema from the University of Southern California. He currently serves as the VP of YHGH, a role he is honored to serve in. Avi has been deeply involved in the Hindu and greater Indian community in Houston. He has been a student at both Arya Samaj DAV Sanskriti School as well as Chinmaya Mission Bala Vihar School. Subsequently, he taught as a student teacher at Chinmaya Bala Vihar for 2 years. Avi also enjoys involvement in various Indian organizations like Ekal Vidyalaya and Hindu American Foundation (HAF). Within YHGH, he hopes to create an atmosphere where fellow young people can discuss aspects of Hinduism and wrestle with ideas to figure out how our ancient teachings and beliefs relate to us in a contemporary context.