Hindus of Greater Houston (HGH) primary role is mainly to bring together all Hindu organizations and hold a Leaders meeting of all Heads and Representation of Temples and Organizations at least once a year. HGH brings together the various organizations under one roof and celebrates one popular Hindu festival, the birth of Lord Krishna- Janmashtami this year on August 25. Notable Bollywood Actor and Kashmiri Pandit Anupam Kher will be the star attraction at the event.

At the meeting of this year Hindu Leaders Meet, held at Keshav Smrithi Houston on July 21, Hindus of Greater presented the members of Hindu Youth Council (HSC) a youth wing that will represent all local area Youth forum from all Hindu Temples and Organizations in the Greater Houston Area.  The HYC will comprise of young professionals and students who will work together to bring about a forum for all in one umbrella. HGH vision is to promote Youth activities and we were fortunate to initiate two other interests besides presenting the Hindu youth Awards every year. The Hindu Youth Council has been established by a group of interested Hindu youth spearheaded by Komal Luthra who was the first to intern and work with the HGH through summer of 2018. The Chairman of the Advisory Board of HGH, Dev Mahajan and Vijay Pallod, Board Member of HGH first conceived the idea of HYC two years ago and Komal Luthra carried the idea to form the HYC. Neha Srivastava and Siddharth Prasad joined Luthra in the presentation about the HYC and informed that Raj Salhotra is the chosen president. The mission of HYC is to Promote Youth leadership, community service and professional networking besides participating in major Hindu festivals. The council membership is open to Hindu youth between 18 and 35, irrespective of their affiliations with any temple or institution or none. 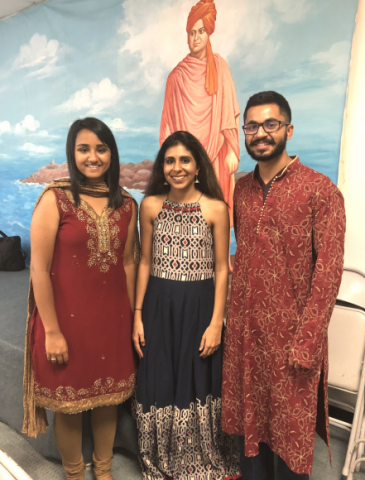 Sharad Amin, HGH board member spoke about HGH taking up the responsibility from this year onwards and Vishwa Hindu Parishad of America started it in 1985. The first camp began with 40 students has grown with phenomenal success to accommodate over 200 campers and 50 counselors. Sharad Amin also appealed to the Hindu community to help establishing a permanent campsite for the annual Hindu Heritage Camp. Namita Pallod, and Vivek Shukla, directors of the Hindu Heritage Youth Camp 2018 informed that within about 30 minutes of opening the registration, the camp attendance was filled up.  This year there are about 435 students who will attend the camp at Camp Lantern Creek, 4045 N FM 1486 Rd. Montgomery, Texas. The Junior Camp starts on July 31st to August 5th and the Senior Camp wil be held from August 7th to August 12th

Rishi Bhutada of Hindu American Foundation shared that Voter registration is a non-partisan activity and it is legal to have voter registration in religious organizations. HAF will hold voter registration drive in all Hindu Temples. “If our community members don’t vote, lawmakers won’t care about us,” he said. Padma Srinivasan, gave the importance of civic duty and It takes only two minutes to fill the form. Tupil Narasiman one of the coordinators of HLM and HGH board member, welcomed the Hindu leaders and guests and explained the purpose of the Hindu leaders’ meet as a opportunity to network as the event provided a platform for sharing their activities with others.

Partha Krishnaswamy, President of HGH gave a brief history of HGH and its growth in the last 29 years. Besides the Annual Janmashtami celebration, HGH has instituted Hindu Youth Awards and every year helps to organize the International Day of Yoga. Girish Naik, the Janmashtami event chair said the goal is to attract a record number of people to the event. He also announced that “The best decorated Temple Award” would be presented with a special prize award and recognition this year. Joseph Emmett, Advisory board of HGH, briefly highlighted the upcoming World Hindu Congress to be held in Chicago. Various temples and organizations were introduced to make brief remarks or their respective organizations.

HGH board member Hemant Jadhav, who also coordinated the meeting, proposed a vote of thanks. Jadhav emphasized that Hindu leaders meet has become a great forum to share and network with all Hindu leaders in the greater Houston area.